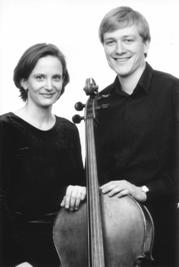 Since then, regular concert activities take place, for example in the series „Live Music Now“ by Lord Yehudi Menuhin as well as benefit concerts for the cultural forum Solingen-Minsk under patron Vladimir Ashkenazy or for the seaquake-victims in the Indian Ocean 2004.

Next to the usual repertoire for cello and piano (Beethoven, Chopin, Mendelssohn, Schumann and other) both musicians apply themselves to rarely known composers of different epochs; in Verlag Dohr (Köln) a CD has been published, which contains apart from the sonatas of Prokofjev and Britten world premiere recordings of „Carmen Fantasy“ and „Elegy“ of the british composer Buxton Orr.

designed and developed by